We have addressed the problem of object detection and tracking for video surveillance systems. For this, we have proposed the integration of an Edge TPU based Coral Dev Board within a Hikvision video surveillance system. In this way, video analytics capabilities are strongly enhanced, e.g., perform object detection at 75 FPS using Tensorflow detection API and deep learning MobileNet SSD models. This preliminary evaluation is encouraging future developments that include multiple modules performing crowd density monitoring, facial recognition, people counting, behaviour analysis and detection or vehicle monitoring.

The components of the experimental setup are presented in fig. 3. They are briefly described below along with the justification for including the Google Edge TPU based “Coral” Development Board (and not other embedded Machine Learning (ML) accelerators) in a video surveillance system. 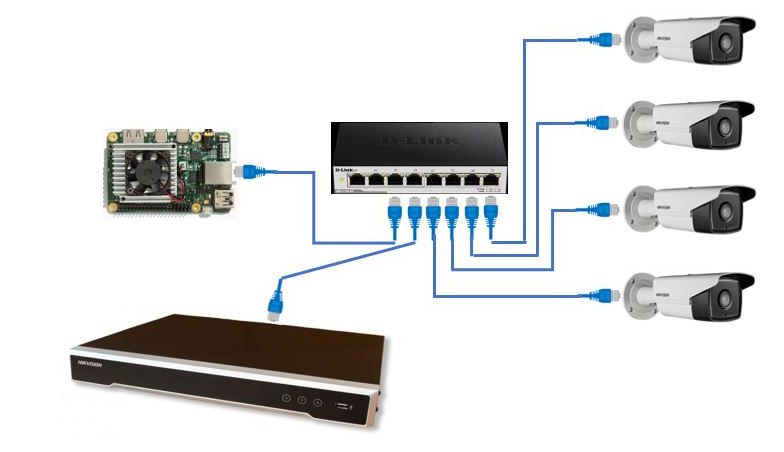 Moreover, according to a NVIDIA study [16], for the particular case of object detection, Google Edge TPU Dev Board outperforms the competition (tab. 1).

Tab. 1. A comparison of ML accelerator platforms for the object detection task.

The experimental part aimed, on one hand, to assess the performance contribution brought by TPU coprocessor over the classical embedded ARM application processors. This comparison has been done using the “Town Centre Dataset” processed using SSD v1 with MobileNet for running the Tensorflow Object Detection API. The Edge TPU appeared to be 30 times faster than the ARM CPU, providing an average inference time of 10ms – see below.

The second part of the experiment involved the usage of the Coral Dev Board in processing live video stream provided by NVR+IP surveillance cameras. The shown results (fig. 5) are obtained using MobileNet SSD v2 pre-compiled model. It behaved better, in term of detection accuracy, than the MobileNet SSD v1. As we had point out previously, the model was pre-trained using the COCO dataset [19] and is able to detect in real time the location of 90 different objects.

Coral Dev Board integrated in a video surveillance system (just detections over 40% are displayed).